What now for Irish Olympic sailing?

It has been almost a month since the last sailing race at the Tokyo Olympics. In most sports, the end of each Olympic Quad (in this case a Quinq) is the traditional time to reflect on the previous campaign and reflect on the one (or more) to come. It is also, traditionally, a period of personnel change, on land as well as on the water.

National sport governing bodies think deeply about current and future resources, both human and otherwise. This time around, the changes to the Olympic sailing program must be taken into account. At the Tokyo competition itself, the Irish team’s management recognized the need for a full debriefing in order to “strengthen the processes” in “all aspects of its preparations”.

A key factor to take into consideration is that generally few Olympic classes have ever developed fleets with significant depth in Ireland, or, for that matter, the UK. Think, Flying Dutchman, Soling, Star, Tempest, Europe, even 470. With the exception of the ILCA (Laser) fleets, aspiring Olympians in Ireland must travel to gain the competitive experience necessary to progress on the Olympic path.

This begs the question of how to identify talent worth supporting if they are not currently sailing the boat they might aspire to.

The (hopefully temporary) rejection of an Offshore event in Paris in favor of kites, means that only three of the ten Olympic disciplines have Irish sailors anywhere on the world ranking lists.

As regular Afloat readers know, Ireland were aiming for qualification in four Olympic classes for Tokyo, but despite full campaigns, they only ended up qualifying in two.

As Annalize Murphy uses some well-deserved downtime to envision the future, the pool of proven Irish sailors may be limited to Rob Dickson and Sean Waddilove in the 49er, Aisling Keller, Aoife Hopkins and Eve McMahon. in ILCA 6, and possibly Finn Lynch in ILCA7. Of course there could be, and there probably are, many more, but which of them would arrive at the starting line in Marseille in less than three years? 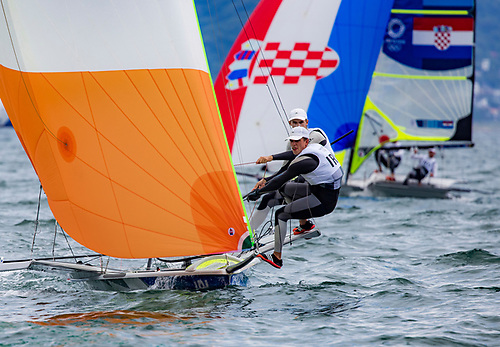 Another uncertainty relates to the investment Sport Ireland is prepared to invest in Irish High-Performance Sailing over the next three years.

On average, just over € 750,000 has been awarded to Irish Sailing each year since 2017. Will Sport Ireland be ready to spit the same, given the rather meager return of two qualifying classes with results in the middle? adolescence and no results in the medal race?

And how do we prepare beyond Paris? Observers of this month’s Laser 4.7 Youth Worlds over Dublin Bay noted with frustration the nationally supported European seafaring squads, where the Dutch, Italian, Spanish and Greek fleets appeared to be particularly well organized and had many sailors. in the gold fleet. In contrast, the largest country in fleet numbers, Ireland, only managed to get four of the 35 boys into the Gold Fleet and two of the 35 girls. If this is an indicator of future Olympic results, then Ireland will struggle to qualify.

Irish Sailing should and probably will use the post-Olympic period to clinically study the quad that has just passed, apply the lessons learned to the next cycle, but perhaps most importantly, consider a longer term approach to developing talent taking into account the ways to balance investment in current and future talent. Perhaps it is time to make some bold decisions that could foster a greater influx of resources into sailing for young people that may not bear fruit until Los Angeles 2028 or Brisbane 2032.